Cogent DataHub is known for its extensive connectivity to OPC DA, OPC UA, OPC A&E, Databases, Excel, ODBC, DDE, Linux, Modbus.  The new V9 takes our saying that "once the data is in DataHub, it can go anywhere" to a new level with IoT connectors and more as listed below.

In this blog post, I'll provide insight into these new features and show you how Cogent DataHub delivers secure, scalable, integrated connections within and between your plants, to the cloud and beyond.

If you’re a current DataHub user or just looking for a solution to solve your particular integration challenges, you can take advantage of the following features in DataHub Version 9:

So how can these features help you?  Let’s dive in and start with the one of the most powerful new features.  Prefer to see DataHub V9 in action? Click Here to Request the Beta

With this release, the DataHub adds support for the MQTT standard.  This means the DataHub can directly connect your operations data to many popular IoT services, including:

Not only does this release provide MQTT client capabilities - Skkynet is the first to provide an industrial class MQTT broker, as well. With the MQTT broker support, users can now aggregate data from MQTT-capable sensors and other data sources and integrate that data into their existing systems using other standard protocols like OPC, Modbus, ODBC, and DDE. 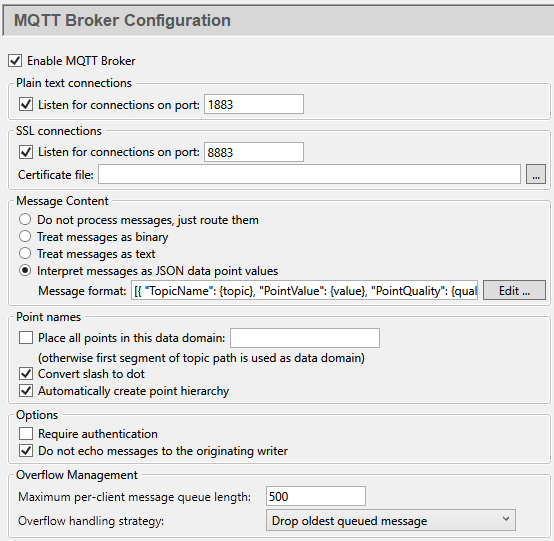 For the MQTT Client capabilities, we looked at MQTT Client tools currently available in the market and developed what our beta users say is the easiest tool to use. With a smart configurator for Azure IoT Hub, AWS and Google, DataHub is the easiest and fastest way to configure and connect industrial data to the cloud – for both publish & subscribe. 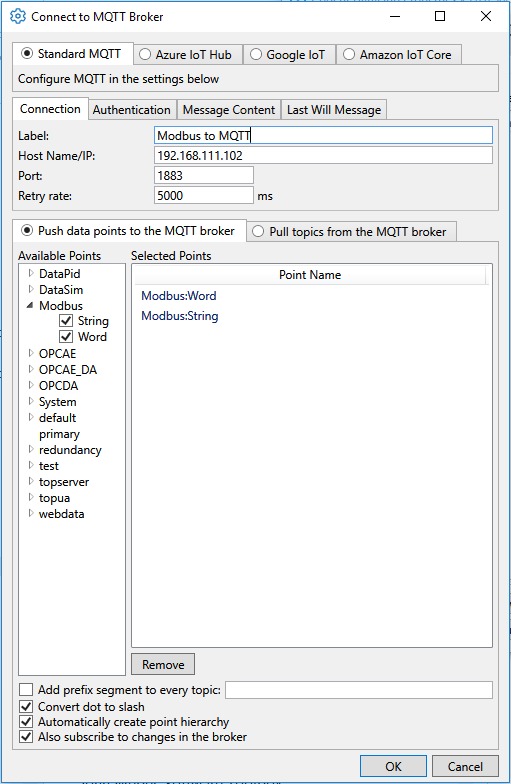 With DataHub IoT solutions users can:

Also in DataHub V9, included in the Core component of every DataHub license pack, users will now be able to configure the DataHub much more easily remotely and when it is running as a Windows service.

With this feature, a user can even configure a network of distributed DataHub installations from a single location.  This is extremely important for our enterprise users with multiple DataHub licenses spread across geographically dispersed areas.

In addition, Version 9 adds security around remote access.  The connection is encrypted and requires user authentication, so you can control who is authorized to configure the remote DataHub, and what options they can configure. 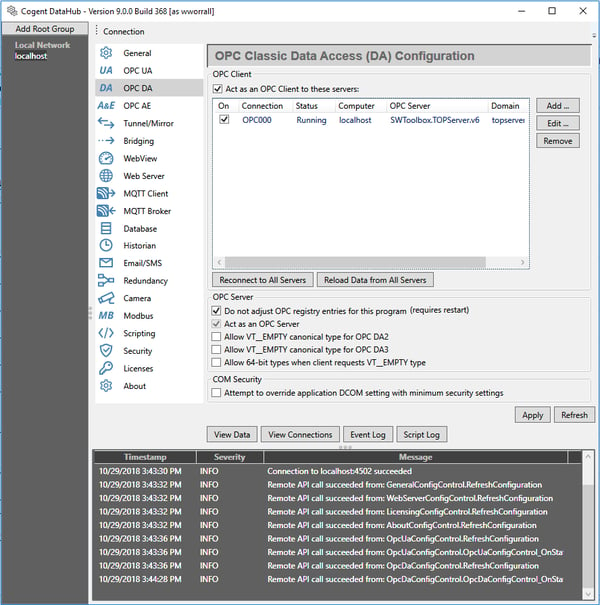 Previously, with Versions 8 and earlier, DataHub has still been a 32‐bit applications, limited to about 1.5 GB of memory (even though most systems these days have at least 4 - 6 GB of RAM).  We had cases where users had over 1 million tags in the DataHub.  They wanted to expand their usage to levels that would have caused them to run out of memory in a 32-bit application.  DataHub Version 9 can now use the full memory of the computer to increase point counts, scalability and overall performance of your system.

DataHub Version 9 also adds support for IP cameras. Users currently licensing Camera support in DataHub Version 8 will now notice they can also connect to an IP camera - just as easily as they did with USB cameras.  Now you can stream live video or images and even control the camera functions using data points, add timestamps, and perform fault detection or motion sensing.

These new features enhance the DataHub's ability to have a connected enterprise on all levels, from the smallest sensor all the way to the cloud and everywhere in between.  Click below to request your Cogent DataHub V9 free trial.  And don't forget to subscribe to our blog to receive notifications about important announcements and resources like this in the future.

Did You Know? How to Recover from Device Errors with OmniServer Error Messages