Can your tunneler do more than just tunnel?

This is Part 5 of our “25 Things to Consider when Choosing an OPC Tunnel” series. Can your tunneler do more than just tunnel?

Many OPC tunnels out there are just that—an OPC tunnel and nothing more. What if you need to perform another operation with the data besides tunneling it?  In most cases, you'd be stuck introducing an additional piece of software to handle any other operations.

This blog post will outline some of the additional functions you might need from a tunneler and why having a single application is the best architecture.

If you are unfamiliar with exactly what an OPC tunnel is please click here for a blog post explaining that topic.  You can see the other parts in the series here.

Some tunnelers support more features that just tunneling, such as:

By choosing a tunneler that has other functionality that can be optionally turned on and licensed, you have only the one application to learn and maintain. When the functionality is optional, you only pay for what you need. 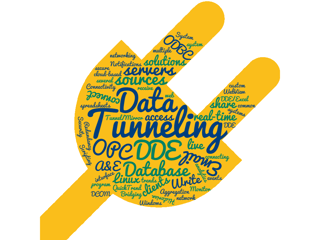 Sometimes when you are tunneling data, the connection is not between an OPC server and a client but instead between two OPC servers. Due to the way OPC works, two OPC servers cannot communicate with each other without a piece of software called a bridge. A bridge is just an OPC client that can connect to 2-to-N OPC servers and move data points you configure between them. A bridge can also allow certain calculations to be performed on the data as it is moved from source to destination.

If the tunneler you are using does not also have the ability to bridge as a built-in, license-enabled option, then you will have to purchase another software application from the same or a different supplier. The result is two software applications to learn and maintain. The more applications you add to your software system, the more blame assigned, the more vendors to work with, and it’s impossible to obtain the same performance if data is passing from one application to another due to the additional overhead.

Before purchasing a tunneler think about the current (and future) project requirements and choose a tunneler that offers the ability to do more than just tunnel data.  By choosing a single application you reduce the number of software platforms you need to learn, configure and troubleshoot. To reiterate from our last post, choosing an effective tunneler that takes into account your application requirements will make a big difference in your operational effectiveness, resiliency, and profitability. Learn about the other reasons in the free whitepaper “25 Considerations when choosing a tunneling solution”.

Performance matters when choosing a tunneler

Configuring a tunneler should be quick and easy