While the recent winter storm in Texas and its rolling energy shortages has brought the subject of the availability of affordable energy and deregulation of power markets to the forefront of the conversation, this has been a problem in many areas of the world for a long time. This is mainly because of the large fluctuations in the price of energy that both residents and businesses have to endure.

It's ultimately the law of supply and demand driving such issues - when energy supply is eclipsed by extraordinary demand for it, an inconvenience during the best of times becomes a crisis in the case of extreme situations such as unexpected winter weather, devastating storms, hotter than normal summers and other unpredictable situations.

In the case of manufacturing and other industries that rely on energy as an input for operations, the cost of energy can literally determine whether a production run is profitable or not. This post discusses methods for monitoring energy costs in real-time from your HMI, SCADA or MES system using OPC UA or OPC DA, for decision support to prevent avoidable losses.

Profitability is ultimately one of the most common goals for any business. So for any business that relies on energy (or, honestly, any other commodity with a price driven by supply and demand) as an input to their process, the cost of that input drives the cost of operations. When energy or water or other raw materials with volatile pricing is too expensive during periods of high demand, your business could be operating at a loss and you wouldn't even know it if you aren't actively monitoring that pricing in real-time and adjusting production accordingly.

This is commonly the case in deregulated power grids - since supply and demand can drive pricing, periods of higher demand can effect any consumer, including businesses. You can see below where, while most of the states in the US are regulated (meaning the government regulates power markets to prevent the highs seen in deregulated, or competitive, states) there are a still a significant number that are competitive markets. 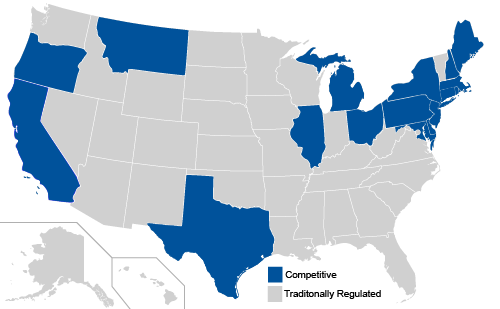 Another consideration in this discussion, however, is how much a company's energy usage is affecting the overall demand for an area. It's not uncommon for some of the largest manufacturing facilities to consume as much energy as a small city or town. As such, if a business were so inclined, monitoring current energy pricing can provide insight into how high overall demand is such that the business might suspend production in an effort to both avoid operating at a loss but to also increase available energy supply, thus lowering the cost for all other users in the area.

We have, in fact, worked with a number of users in the past that have monitored power pricing in such a fashion. Some such users apply the practice of halting the manufacturing process when the energy prices get too high. It's common for such companies to have calculated their energy usage over time such that when the cost of energy rises to a certain amount per megawatt-hour, it is more profitable to stop producing and sell their power back to the grid.

Many of these grid operating companies that supply power to competitive markets actually provide a website where current pricing information is regularly updated. But that is simply values displayed and updated in a web browser. How then do you then get this information into your HMI, SCADA, Historian, MES or status system?

When users have come to us in the past for such projects, we have recommended the Cogent DataHub to solve this problem. The DataHub has the ability to read or "scrape" the website and parse out or filter the desired information into OPC UA, OPC DA, ODBC and many other data protocols, making it available to all of your systems through those interfaces. 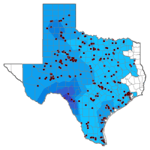 Let's look at a quick example to put what I'm saying into context. Let's say you are in Texas which would mean there is a good chance that ERCOT® (Electric Reliability Council Of Texas) is your grid operator (ERCOT operates the electrical grid and manages the deregulated market for 75% of the state of Texas). ERCOT has a website that regularly publishes real-time power rates.

At the time of writing the energy price was $16.82 per megawatt-hour (MWh). The DataHub was able to query the website, parse out the price at the current time and create an OPC item called CurrentPrice which allowed an HMI or SCADA to access the pricing. 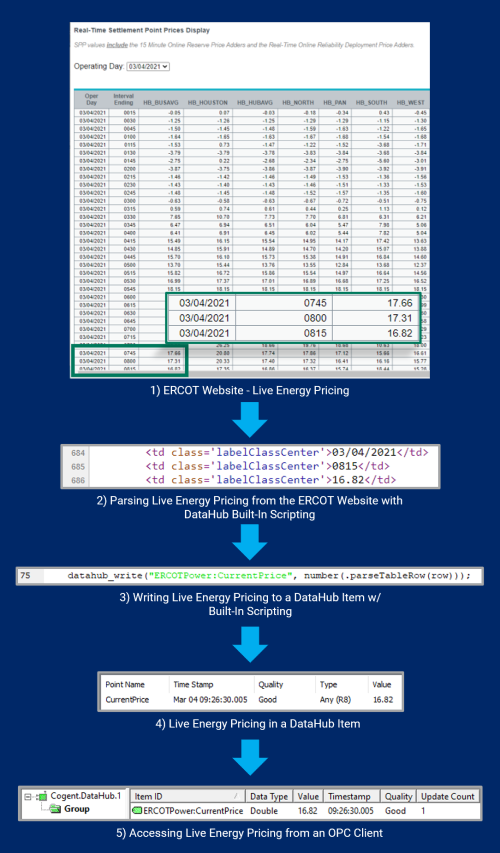 Once the pricing data is in a DataHub tag, we can connect an OPC client to DataHub to read the value. You can also send this data to any data source DataHub can connect to. Those other systems can then use that data for decision making or automating processes to control when production is occurring or not

If you haven't already, please remember to subscribe to our blog to find out about the latest updates to DataHub and for other how-to's and use cases for the Cogent DataHub.

Ready to access energy pricing and other data from your HMI, SCADA, historian, MES or other automation system with the DataHub?

How to Easily Integrate Your Data with Amazon AWS IoT Core