If you're reading this post, you're more than likely working in the oil and gas industry, and you probably have flow computers and devices from different vendors storing historical EFM (Electronic Flow Measurement) data.  And, if your company is anything like the other companies in that industry, you use that EFM data for analysis, custody transfer and production optimization using one of the common EFM flow measurement analysis packages such as Flow-Cal, Quorum PGAS or even CSV or SQL.

In this blog post, I'll cover the video how-to resources available to help you get started using our EFM Suite for TOP Server to poll and export collected EFM data from various flow computers for Wonderware applications. 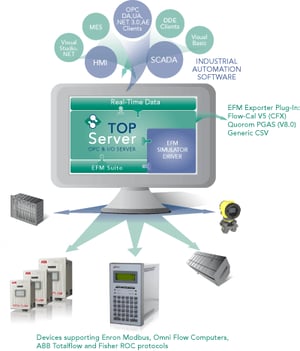 Over the past few months, you've probably seen at least one of my video blog posts on the different components of the TOP Server EFM Suite and how to use them.  I know that it's not uncommon for each oil and gas site in an enterprise to be different with respect to what vendor of flow computer was implemented (among other differences).  That variability from site to site sometimes makes it difficult when you're trying to bring all of your enterprise EFM data together.

Don't worry though - this blog post will be short and to the point.  I wanted to give you one place to go where you can see the wide variety of supported flow computers or protocols and how to connect to them.  And, then, how to get that data polled and exported to your analysis package of choice.

How to Connect to Your Flow Computers

So the first step to collecting EFM data from a flow computer is to make the actual data connection to the flow computer, whether it's serial or Ethernet (cellular, radio or other medium).  The TOP Server EFM Suite has a variety of EFM-capable drivers to help you get connected to your flow computers:

And all of those options are included in the TOP Server EFM Suite and also include real-time data collection capabilities in addition to EFM collection.  And, if you're working on a new project or site where your flow computers aren't available yet but you need to do some testing, the EFM Suite even includes an EFM Simulator driver for TOP Server testing without the actual hardware.

How to Poll and Export Your EFM Data

So, now that you're actually connected to your flow computers, what's the next step?  The EFM Exporter plug-in maps attributes to defined EFM parameters for upload into the desired flow analysis software package. Both gas and liquid EFM data are possible, where supported by the hardware/firmware of the flow computer, providing the same look and feel for both types of application.

The plug-in is also what controls the frequency and timing of polling the EFM data from your configured flow computers, allowing flexible schedules to help you prevent overloading your network in those situations where you have a lot of devices at a site.

And, once the parameters are mapped and the polling frequency set, the EFM Exporter plug-in supports exporting your flow data to several formats:

It's easy to get started - click here to watch the step-by-step video tutorial now to start using the EFM Exporter plug-in.

And, since TOP Server supports hundreds of other drivers for real-time data collection, as well, it's not uncommon to use TOP Server as a single point of data collection for all data, both EFM and real-time, lowering the learning curve for new engineers and making troubleshooting and maintenance an easier, more efficient process.

Don't forget to subscribe to our blog to find out about the latest updates to TOP Server and for other useful tutorials and resources.

Ready to start collecting and exporting EFM data from your various flow computers?

Did You Know? How to Setup a Heartbeat Message in OmniServer

Did You Know? How to Setup Chained Messages in OmniServer