In this blog post, we'll highlight some specific key details about which historians are supported and how other DataHub functionality works with those historians to provide flexible options.

One of DataHub's core abilities is sourcing data from the many variations of OPC solutions, databases, MQTT solutions and more. Then, once the data is in the DataHub, there are many flexible options for what to do with that data. 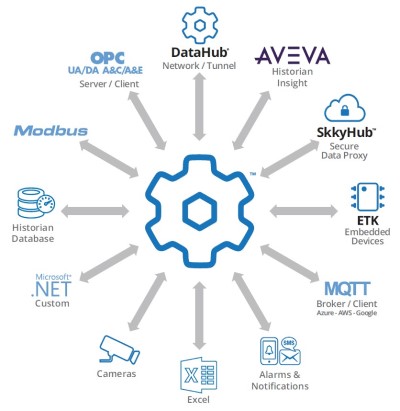 In keeping with that approach, DataHub V10 now provides integration with the following common external historians for read and write operations (as well as working with other DataHub functions, which we'll cover shortly): 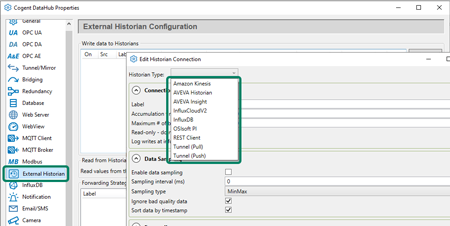 Software Toolbox has worked extensively in what was once the Wonderware space and now AVEVA since 1996. With expertise in integrating AVEVA solutions with a wide range of devices and systems, DataHub's support for both AVEVA Historian and AVEVA Insight expands our users' options for your AVEVA projects.

OSI PI users have utilized our TOP Server and OmniServer products for many years for expanded device and system connectivity using standard OPC interfaces. With DataHub V10, those same users can also benefit from DataHub's ability to exchange real-time data into the OSI PI system using the PI Web API, a RESTful interface.

InfluxDB is available in two flavors (both supported by DataHub in V10). InfluxDB is a popular open-source time-series database that includes the Chronograf and Grafana tools for dashboarding and analysis, respectively.

InfluxDB Cloud is the cloud-hosted version of the time-series database offered as a managed service, giving you the power of InfluxDB and the freedom of a serverless solution. It's available on multiple platforms including AWS, Azure and Google Cloud.

As opposed to a relational database like SQL, InFluxDB is purpose-built for applications like historizing time-series data and in a much more optimized and efficient manner.

Of course Amazon's cloud historian solution, Kinesis, is supported. DataHub can push data from any of its supported interfaces to Amazon Kinesis in real-time, making it available for big data applications, analytics, dashboards, preventative maintenance, production planning and other time-saving and money-saving imperatives.

As a cloud-based real-time data streaming service, Kinesis is capable of capturing GBs of data per second continuously.

DataHub Integration with Other Historians via RESTful API

With DataHub's RESTful client, it's possible to make calls to RESTful web services and send data from any of DataHub's supported interfaces to any historian or other RESTful webservice. This is useful for historians that don't have a custom interface like the other's we've covered but that have provided an integration option via REST.

As I mentioned briefly earlier, DataHub goes further than just supporting the logging of data to the referenced external historians when coupled with DataHub's other flexible features.

This new functionality goes beyond just logging data to these historians. It also supports retrieving data from them for sharing with other systems using those same interfaces.

So DataHub gives you the flexibility to read data back out, as well, even providing the option to make an external historian connection read only. In a world where it's not uncommon for one company to have multiple historians with some form of enterprise level ERP or other higher level system, having the ability to aggregate data in order to provide a comprehensive view of your operations is crucial.

Most historians are also somewhat limited in the variety of interfaces they can use to read data for historization, making DataHub a useful data gateway that allows you to still leverage your historians built-in tools for analytics, reporting and trending.

DataHub's list of interfaces is constantly expanding, now including several OPC options (OPC UA for Data Access and Alarms & Conditions, OPC DA Classic, OPC AE Classic, MQTT, databases, DDE, and more). And those interfaces include both client and server for the most flexibility in bringing all of your different systems together.

For applications where data loss is either undesirable or out of the question (common in the oil and gas industry for auditing and governmental reporting), DataHub store and forward support provides peace of mind that when there is a connectivity issue of any sort, data isn't lost - it's aggregated locally until the connectivity is restored.

Secure Tunneling for External Historians Enables Integration Across the Enterprise

As you are probably aware, DataHub tunneling functionality works with any of the interfaces supported (now including external historians) to move any data that you can get into the product, between sites and locations securely, even without opening firewall ports on control and business networks, working with proxies and DMZs. 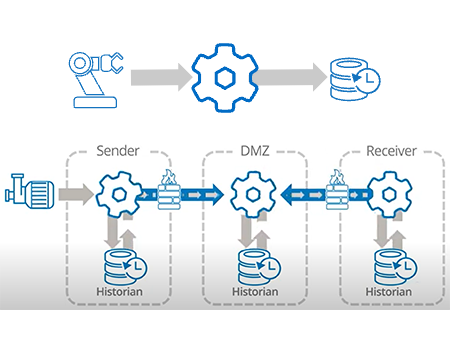 Combining historian support with tunneling enables DataHub to tunnel historical data while also leveraging the store and forward capabilities for a wide reaching and robust solution.

External historian support combined with all of DataHub's other flexible features gives you a centralized and comprehensive solution for bringing all of your historian and other key systems together for easier proactive decision making. Stay tuned for more in-depth how-to details for the supported external historians in the coming weeks.

If you haven't already downloaded DataHub V10, we encourage you to get started testing with your own historian using the free trial. And don't forget to subscribe to the Software Toolbox blog to receive notifications about important announcements and resources like this in the future.

TOP Server for AVEVA V6.11 Features to Be Excited About