Another common non-standard device integration scenario that we encounter is integration of phone and intercom systems with the control system.  There is normally a control application provided by the system manufacturer but that adds another system that the user has to know, use and maintain.

In the next blog post of a series on OmniServer user stories, we’ll discuss a specific use case of a system integrator working with a correctional facility needing direct integration of their Telecor phone and intercom system with Wonderware.  And we'll discuss how OmniServer provided a driver to the Telecor system without the need for custom code, eliminating the need for an additional control application.

With many non-standard devices with their own custom protocol and no off-the-shelf driver, it's not uncommon for the device manufacturer to have provided some control software for communicating with the device.  In theory, this is great as it allows you to communicate with the system.  However, in most control scenarios, users have multiple systems to control.  If you had to control each individual device with a separate piece of software, you would have no communication between systems, you'd have an exponentially greater learning curve in training new operators and you'd have much higher maintenance costs.

For all of those reasons and more, this is less than ideal.  Instead, it makes more sense to interface one central control system, such as Wonderware, to all of your devices so that you have a centralized view of all of your systems and infrastructure..

The Use Case - Integrated Phone and Intercom Control

To that end, I want to discuss the use case where one of our system integrator partners was working with a correctional facility.  They had a phone and intercom system from Telecor that was a standalone system.  Their objective was the integration of that Telecor T3-SC Security Communication System with their Wonderware InTouch HMI that was being used for monitoring and control of all other systems in the facility.

The Telecor T3-SC has a central controller device which has a proprietary protocol for communications from third-party applications. So the project was to implement a solution that would allow InTouch operators to control reading and writing operations to the Telecor communication system. The ultimate goal was to eliminate having to be trained on additional software and having to maintain a separate control application for the Telecor system.

Before this project, the Telecor system was accessed using a separate touch screen console and graphic panel console that was NOT integrated with their visualization screens in Wonderware InTouch. 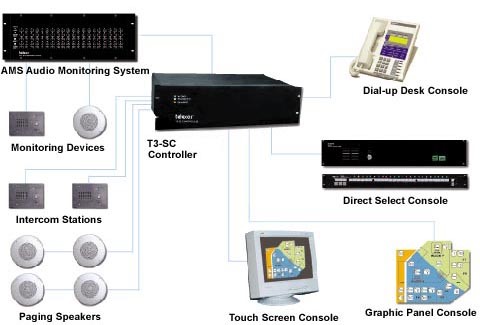 As such, whenever they needed to access the system, they had go to one of those separate consoles.  This not only added time to the process also resulted in the operator not monitoring other systems during that time.

This diagram shows the basic overall system layout with OmniServer as part of the new integrated solution with Wonderware. 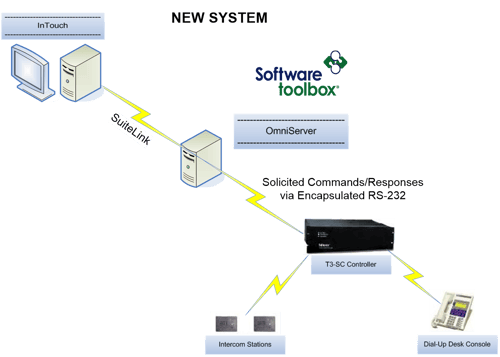 The proprietary protocol used by the Telecor T3-SC Controller is composed of both Solicited Commands sent to the controller and Unsolicited Data sent by the controller to the host.  The OmniServer protocol for this system is setup to handle both types of messages.

Message patterns are configured for all of the messages that can be sent to the T3-SC Controller, with items for any variable parameters that need to be passed from InTouch.  Message patterns are also configured for all unsolicited messages that can be received from the T3-SC, with items for receiving any parameter values that need to be passed to InTouch.

The T3-SC Controller processes all commands, routing them to the appropriate end components, such as intercom stations or phone consoles based on the variable parameters that are part of the commands.

Implementing OmniServer with the T3-SC communications system resulted in full interaction capabilities from the Wonderware InTouch HMI at the correctional facility.  The new architecture provided the following benefits:

Email us at support@softwaretoolbox.com with your questions and subscribe to our blog for more helpful OmniServer tutorials and tips.  And make sure to download your free trial of OmniServer to get started integrating your phone systems, intercom systems and other non-standard devices.