One of the most common device integration scenarios that we encounter is needing to control a printer and/or label applicator directly from an HMI or SCADA such as Wonderware.  And printers can be tricky, with most having similar but still different communication protocols - so how does one account for that kind of variability?

In this first blog post of a series on OmniServer user stories, we’ll discuss a specific use case of a paper products manufacturer needing direct control of their printing and labeling process directly from Wonderware and how OmniServer provided a driver without the need for custom code.

In any industry where a finished product of some sort is being created, there will inevitably be a packaging and labeling step in the process.  Many times, the printing and labeling equipment has potentially been in place for some time and the "integration" of that equipment is as basic as manual entry or possibly has been accomplished through wiring the printer up to a PLC.

Even if it's a new system being implemented, the ideal is to have the most direct control of printing and labeling tasks as possible by the operator of your HMI or SCADA for the process.  But printers don't typically just have an off-the-shelf OPC server to facilitate that level of direct control (not like devices that support a protocol like Modbus, for instance).

To provide some insights into solving this sort of problem, let's look at a real user story as a representative example of how to accomplish more direct control in a printer architecture that started off much more indirect.  A system integrator was working with a large paper producer on their printing architecture using Zebra label printers.

As part of the production process, it was required to print and apply a barcode label to finished pallets and bales of product prior to shipment. Each pallet or bale of product was labeled with a unique “license plate number” drawn from an existing ERP system by their Wonderware InTouch HMI.

Printing was occurring indirectly from the HMI to a PLC, which actually performed the print command to the Zebra label printer. With such an indirect architecture, if there were ever any communications problems, it was much more difficult to pinpoint which component of the system was having the problem and resolve the issue.

The client wanted more direct control of the printing functions from the Wonderware InTouch HMI application.  As part of that proposed new direct architecture, it would be necessary to send the required LPN data from InTouch using the necessary commands to the Zebra label printer using the native Zebra printer protocol called ZPL-II.

The Indirect Architecture of the Original System

The diagram here shows the overall architecture used in the previous design of this system.  The control of printing and applying the labels was done in a roundabout fashion through PLC logic in a Simatic 505 controller. 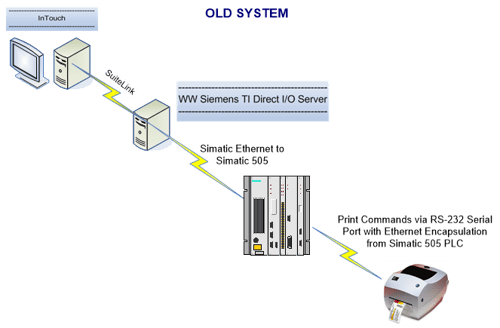 The Simatic controller had some of the basic Zebra ZPL-II protocol commands programmed in PLC logic.  Should any additional ZPL-II protocol commands ever be needed in the future, they would have to be added to the PLC logic, which was less than ideal.  The variable information such as the unique LPN number was written to V registers in the Simatic controller from InTouch through the Wonderware Siemens TI Direct I/O Server.

The logic in the controller used these variable values to construct the print command string, which it transmitted to the Zebra label printer from the RS-232 port, which was connected to a Serial-to-Ethernet converter to transmit the printer commands to the Zebra printer across the network, where they were processed and the labels would be printed and applied.

The Direct, More Efficient Architecture of the New System

The architecture of the new, more direct system implementing OmniServer is shown here in this diagram.  With an OmniServer solution, the overall architecture was simplified here, as several previously required components were no longer necessary. 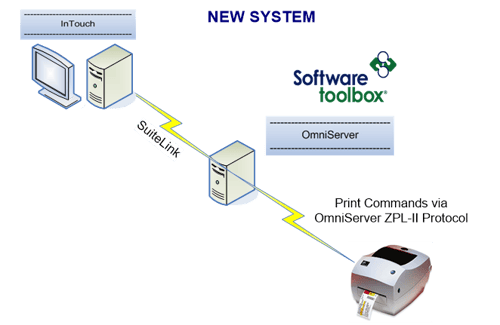 Rather than variables such as the LPN number being written to V registers in a Simatic controller, the variable values are now passed to items configured in the OmniServer protocol, thus triggering the print commands in OmniServer to be transmitted directly to the Zebra printer.  With OmniServer’s built-in Ethernet device support, it was also no longer necessary to use a Serial-to-Ethernet converter for sending commands across the network to the printer.

As a result of using OmniServer, the efficiency of the overall labeling system was greatly improved.  Some of the key benefits included:

For any such printer integration project, OmniServer provides an easily configured, easy-to-integrate, custom protocol server, that can be configured to do anything from triggering individual prints to downloading whole print formats to the printer. (For new users, if you'd like an introduction to using OmniServer, please click here.)

Just make sure the protocol documentation for your particular model of printer is available [for a tutorial on evaluating protocol documentation, click here] on how to format the messages to the printer.  Beyond just Zebra printers, we’ve had experience implementing protocols for many different makes of printers, such as Leibinger, Zebra, Domino, Matrix, VideoJet, and others. (For a general discussion on integrating printers, don't miss this blog post.)

Top 4 Dream Report Features to Be Excited About in the V5.0 R2 Release