Connecting Windows to non-Windows in Your Control System

This is Part 10 of our “25 Things to Consider when Choosing an OPC Tunnel” series.  Are there ways to connect a Windows system to a non-Windows system with the Tunnel solution?

Since OPC was designed around DCOM, a Windows only technology, you simply do not find OPC Data Access Servers that are supported in a non-Windows environment.  Nonetheless, it's not unusual for control systems to have both Windows and non-Windows machines that need to share information.

This blog post will discuss how it can be possible to link Windows and non-Windows systems in your control systems. 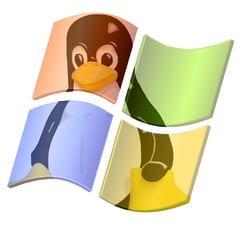 In the mid-1990s, many users in manufacturing began standardizing on Windows.  However, both before and since that time, other operating systems have also been in use.  Operating systems can range from Linux, QNX, VxWorks, AS/400, VMS.  Name the non-Windows OS and users have needed to integrate it with Windows due to the sheer proliferation of Windows usage.

Does this sound familiar?  Do you have some other non-windows OS that requires integrating data from a Windows system, or vice versa?

In similar fashion to avoiding DCOM using tunneling, a tunneling solution can offer the potential to bridge the gap between Windows and non-Windows systems.  If one of your requirements is to integrate multiple OS platforms, make sure to ask your tunneling software supplier how they handle non-Windows connections.

One method is to provide a sister version of the tunneling software that is compatible with the non-Windows operating system.  This effectively allows the Windows and non-Windows versions to establish a normal tunnel similar to how a Windows to Windows tunneling connection would operate for sharing data.

Another method would be exposing a pure TCP/IP API.  This method is extremely flexible, as it allows connectivity with any OS capable of opening a TCP/IP socket.  It opens the possibility of sending text commands and parsing name/value pair response to those commands.

Yet another method would be exposing a Java API.  With Java being supported on many non-Windows operating systems, such an API could also be used in similar fashion to the TCP/IP API to share data between operating systems.

Regardless of the method, if your operations require connectivity between Windows and non-Windows systems, make sure to select a tunneling solution that provides this capability.  To reiterate from our other posts, choosing an effective tunneler that takes into account your application requirements will make a big difference in your operational effectiveness, resiliency, and profitability. Learn about the other reasons in the free whitepaper “25 Considerations when choosing a tunneling solution”.